on February 17, 2021
Oramen
Chelsea
579 6th Avenue
b/t 16th & 17th Streets
Website • Yelp • Instagram
Valentine's Day dinners can be very overrated, especially when it's an over-priced prix-fixe menu at an overcrowded restaurant with mediocre food.  As much as I'd love to have dined at a restaurant, there were plenty of silver linings this year...I was able to try a bunch of different things not being limited to a set menu, every dish was fantastic, and we had some dishes that I honestly hadn't had since well before the pandemic (I see you, crispy rice!).
This was also the first meal as part of my Around the World: Quarantine Edition where every single dish earned a "GET IT" rating.  So happy with Oramen! 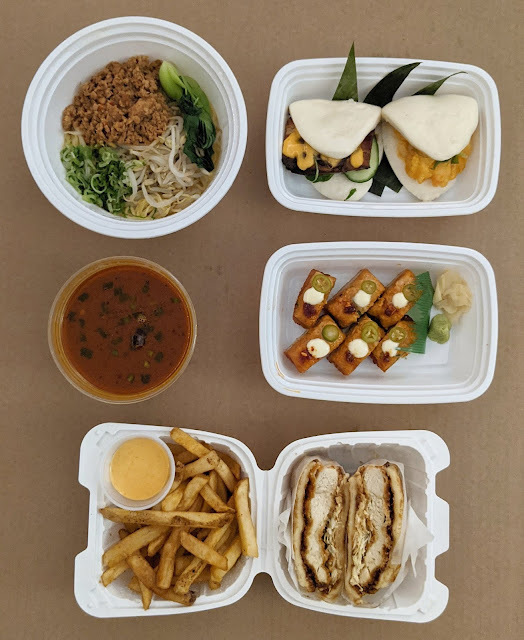 Tan Tan Ramen: Chicken broth, spicy chicken soboro (ground chicken), baby bock choy, bean sprouts, and scallions
Not your typical ramen, but it was really great!  It had heat without being tongue-numbingly spicy.  And the ground chicken was a nice change of pace from the more standard chicken chashu - GET IT
Pork Bun and Shrimp Bun: The buns themselves were like fluffy, little clouds.  The pork was really tender and having the cucumber on there gave it a nice additional texture.  The shrimp were tossed in a spicy mayo - GET IT (THEM)
Spicy Tuna Crispy Rice - Spicy tuna on crispy rice, topped with shitake mushroom, pickled Serrano, and yuzu mayo
This is a dish that I've been craving for about a year!  My go-to Japanese/sushi spots don't have it, which is a shame! I recently looked into making it myself, but was definitely too complicated. Everything about this was just heavenly - GET IT
Katsu Sando Set - Japanese traditional chicken cutlet sandwich served on milk bread with seasoned fries
I've had chicken katsu before, but never a katsu sando. It's really trendy lately, and lived up to its hype!  Flavorful, tender chicken, great katsu sauce, and delicious milk bread (think buttery, soft French toast). And even though the fries got a little soggy in delivery, they had a great season salt...and added bonus, I was able to revive them and crisp them up again  in a pan - GET IT!
Around the World: Quarantine Edition Chelsea Japanese Sushi/Japanese