on February 04, 2021
L'Express
Gramercy
249 Park Avenue South
at East 20th Street
Website • Yelp • Facebook • Instagram
With indoor dining on hiatus for the time being, Restaurant Week in NYC changed up its program this season. 500+ restaurants are offering entrees (and sometimes a side or starter) for $20.21 via takeout and delivery. It's a great way to support local restaurants and a fun way to try restaurants that would never have entrees for that price or that typically don't offer delivery/takeout.
I've been eager to get to France on my Around the World: Quarantine Edition tour. And while I've been to L'Express before, I thought it would be fun to try their Restaurant Week menu.  They offered a choice of five entrees served with the soup du jour. 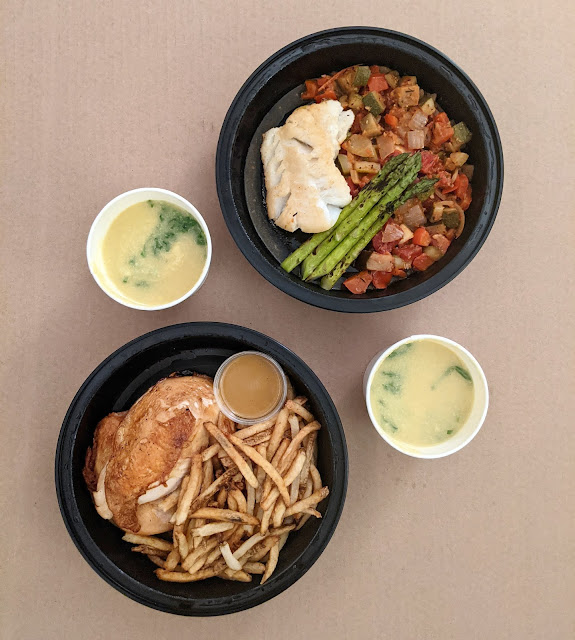 Pan-roasted codfish with ratatouille and asparagus
This was such a great dish. The cod was perfectly seasoned and cooked so perfectly. And the ratatouille had so much flavor. GET IT
Organic half chicken au jus with French fries
This is such a classic French dish and hit the spot. The chicken was great, but the fries did not hold up in the takeout container.  Not a surprise, but a bummer nonetheless because I remember their fries being delicious when they're fresh. GET IT (but maybe opt for the mashed potatoes instead)
Soup du jour - Cauliflower with turmeric
This was kind of bland, and I ended up having to add salt and pepper to it. There wasn't another option for the side/starter, so we just made do with it. FORGET IT (if you can)
Around the World: Quarantine Edition French Gramercy