on January 21, 2021
La Pizza & La Pasta
Eataly - NYC Flatiron
200 Fifth Avenue
at 23rd Street
Website • Yelp • Instagram • Facebook
Truffle Cena Per Due - 3 Course Eatalian Truffle Dinner
I spent longer than I'd like to admit looking into dinner options for New Year's eve. Waaaayyy too long! I somehow stumbled upon this prix fixe menu from La Pizza & La Pasta from Eataly, and it seemed like a lot of great dishes...and a great deal too.  It came with the choice of two appetizers (they didn't use an Italian word for this course HA), two entrées (secondi), and one dessert (dolce). 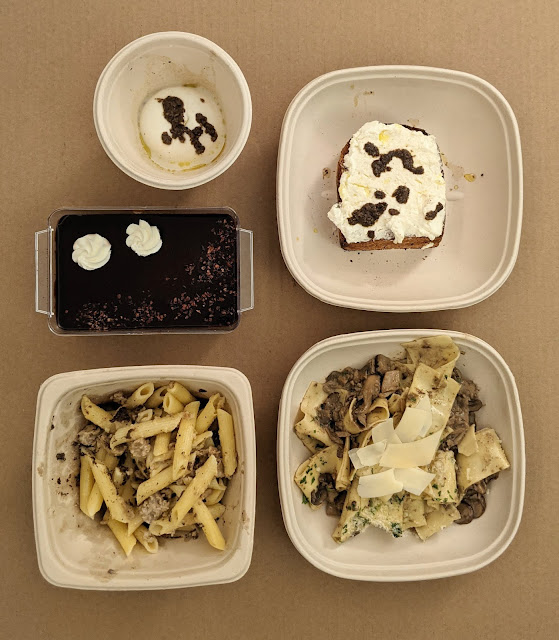 (Counter-clockwise)
Burrata: Liuzzi burrata, Urbani black truffle, olive oil, and Maldon salt
So so good, but just wish it came with some bread or something else to accompany it. GET IT
Crostone ai Tartufi: House-made wheat bread, Calabro ricotta, Urbani black truffles, and honey
This was delicious, but it could have used a little more honey.  Silver lining of ordering in is I got to add some of my own! GET IT
Pappardelle con Funghi - house-made pasta, mushroom ragu, and Urbani black truffle butter
The pasta itself was incredible, perfectly al dente even after being delivered a good 15 blocks. GET IT
Penne alla Norcina - Afeltra pasta, house-made black truffle sausage, pecorino and Urbani black truffles
This dish was pretty meh, and I was kicking myself for not selecting the other (3rd) entrée option. The pasta seemed pretty standard, and there just wasn't enough going on in the dish except for a sprinkling of sausage. FORGET IT
Cioccolato: Chocolate cake, chocolate cream, and candied cocoa nibs
Wow, this was fantastic.  It was such a huge portion, and so rich. It took us three nights to finish it...and we savored every bite. GET IT
Overall it was a great meal, and felt "celebratory" because of all the truffles.  I love anything truffle for the most part, but have never bought any or cooked with any before.  Definitely check it out while truffles are in season and while this prix fixe is still around!
Around the World: Quarantine Edition Flatiron Italian