Why Walk When You Can [Food] Crawl

on February 02, 2016
As a gift for two birthdays and one Chanukah, and many random days in between, Adam has asked for me to write a post for Miss Menu.  Isn't he sweet?!  So, Adam, happy belated birthday(s) and Chanukah!  Better late than never, right?  So here goes nothin'...my first post in 2 years...

A few weeks ago, we were having trouble deciding what type of food we wanted for dinner.  What else is new!  So rather than pick a restaurant and enjoy a relaxing meal, we decided to go on a food crawl in the East Village.  And it was glorious...and gluttonous! 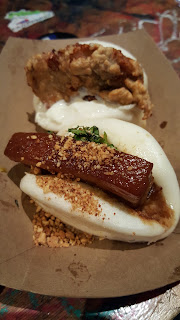 ﻿
I asked for my Birdhaus bao with no peanuts, and the cashier quickly asked me if I was allergic. I was really caught off-guard by the question, so I just answered "yes."  Then as we waited for them to make our baos, we realized what answering "yes" would mean.  They had to put on new gloves, wipe down the entire prep area, and use new utensils.  I felt so terrible!  But good to know from any of you with peanut allergies that they take it really seriously.  Both were delicious.  Stop 1 was definitely a success.
Stop 2 - Mimi Cheng's Dumplings
179 Second Avenue
b/t 11th & 12th Streets
Website • Facebook • Twitter • Instagram﻿ 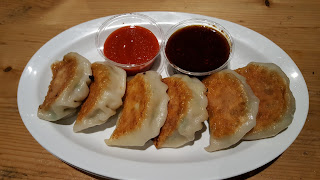 We got them pan-fried, and they took a REALLY long time to come out.  But it was worth the wait, great flavor.  And that sauce!  You can also order them boiled.
Stop 3 - Taqueria Diana
129 Second Avenue
b/t 7th Street & St. Marks Place
Website • Facebook • Twitter • Instagram 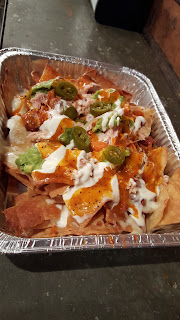 This photo doesn't even begin to do these nachos any justice.  They are MASSIVE.  It's literally served in a baking tin...and probably an 8"x12".  We saw a group of five sharing an order, and there we were, just the two of us, going to town all on our own!   The size is not the only thing these nachos have going for them.

I can confidently say that they are the best nachos I've ever had in my life.  The shredded chicken is so flavorful and tender.  The chips are super crunchy after the whole tray goes under the broiler to melt the cheese.  I've been recommending these things everyone who asks if I've had any good meals lately! 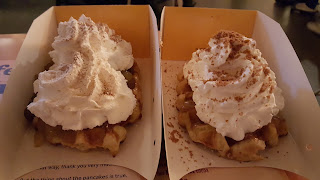 First of all, that was insane to order two waffles after all of the above-mentioned food.  Not sure who we thought we were!  Don't worry, though, we didn't finish both of them.  Because that's what would have made this food crawl over the top...and not the hundreds of bites that came before that!

The popularity and number of the Wafels & Dinges trucks speak to how delicious they are.  The scent wafting off of the trucks that are located around the city and the scent of the entire brick & mortar location in Alphabet City is just heavenly.  I'm so glad they have spread the word around New York about how good spekuloos is.  It's my second-favorite spread, after Nutella, of course!

All in all, I think this food crawl was a success!  Such a great way to try a few different places, and it definitely makes for a fun evening hopping from place to place, especially on a nice night.
Asian Chocolate/Dessert East Village Mexican

top 10 essay writing services uk said…
amazing work! thanks for sharing with us your lovely resturants adventures, and make us selective for our next meal at some wonderful places,keep posting.
11/27/17, 4:29 AM