My department at work has a delicious, yet dangerous, tradition of going to New Ashiya for group outings instead of a going to a Midtown bar like most groups do.

If you haven't heard of this place, it's a pretty run-down sushi spot with OK sushi frequented for one thing, and one thing only: all-you-can-eat sushi and all-you-can-drink sake and beer. The deal lasts 2 hours and is only $30...a great deal for big eaters/heavy drinkers. Not so much for my less adventurous co-workers who ordered a plate of chicken teriyaki and had 2 beers. But, I digress...

The sake bomb tally hit 9 last night, and I was definitely paying for it this morning! But, without the massive quantity of sushi I ate, I'm pretty sure I would have been in even worse shape. 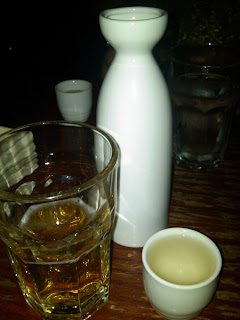 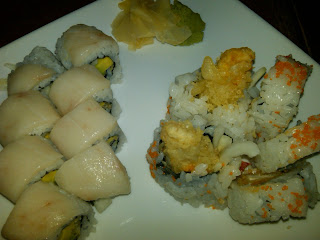 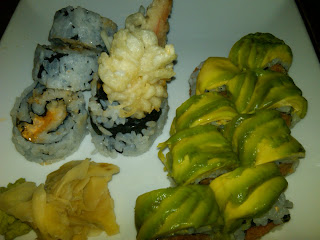 It gets an A for:
- Quantity - a lot of sushi options and a lot of food.
- The AYCE/AYCD deal.

It gets an F for:
- Quality. To be fair, it's not gross, it's just not top quality. Plus, alcohol kills germs, right?!
- Not the friendliest service. Then again, if I had to put up with 20- and 30-somethings sake-bombing all night long, I'd probably be a little cranky too.

CNA training said…
I agree with you. The pic definitely shows quantity over quality. In some sushi outlets, the quantity served is little but the quality is WOW. If the service of an restaurant is not good, unfriendly, I wouldn't want to go back to that place again even if the food is good.
8/5/11, 5:59 PM