on June 09, 2011
I had dinner plans with SN on Monday night, and we were eager to try a new restaurant, and definitely one out of the Midtown area. After doing a little (too much) research, I came up with a list of 5 options, and we decided on Coppelia, a new 24-hour Cuban diner on W. 14th Street.

Coppelia is part of the same restaurant group as some well-known Latin staples like YerbaBuena and Toloache, so I was pretty confident the meal would be good. In my research, I came across the restaurant’s Yelp page, and read a few of the reviews. Everyone seemed to like the food a lot, but there were a handful of mentions about the service. I figured how bad could it be in a casual diner setting, so I closed the page and headed downtown.

I got there a few minutes early, and when I walked in, I was bombarded by 4 employees greeting me and asking how many my party would be. [Trying to stay open-minded and ignore the Yelp comments.] I said there would be two and asked if we could get a booth. I was seated towards the back, and within seconds water appeared and two servers asked if I wanted to order anything to start. I informed both of them that I’d like to wait for my friend to arrive. Three sips of water later, and the bus boy was back to refill it. The next 10 minutes was spent watching the employees in black t-shirts hovering and circling the small restaurant. I knew I was probably a little biased because of the reviews I read, but this was getting ridiculous. ANOTHER server came over and asked if I wanted to wait for my guest to order. I reiterated yet again that yes, I’d like to wait...and how I would appreciate them chilling out a little. My water was refilled 3 more times, and then I was finally saved my friend’s arrival. I vented for a second, and decided to just ignore it and enjoy the meal!

In a true diner sense, the menu served as the placemat, and was pretty extensive and definitely creative. It had some Cuban staples like empanadas, Cubano sandwiches, and arroz con pollo. And it also had some more offbeat items like tuna melts, mac & cheese with pork belly, and baby back ribs. We decided it’d be fun to share a few items (when isn’t it?!) and narrowed it down to three things.

We ordered the nachos, fish tacos, and arepas. The nachos were topped with Chihuahua cheese, black beans, jalapenos, and chopped beef short ribs (which we asked for on the side). They were incredibly tasty, but seemed like a small portion. I guess I’m used to getting monster plates of nachos when you order them at a bar. 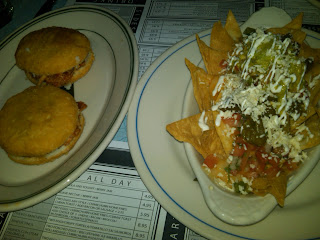 The mini arepas were filled with roasted chicken, guacamole, and chipotle salsa.  The outside became a little too hard, so it was difficult to eat, but it was very tasty.  We made these deluxe, so they were served with excellent sweet potato fries with two great dipping sauces. 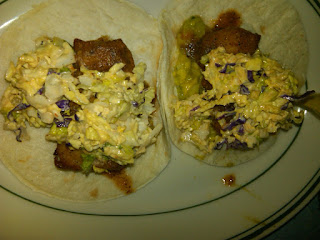 And lastly, the fish tacos were my favorite part of the meal, although I wish it had come more than 2 per order.  Crispy flounder pieces were topped with a delicious and messy chipotle coleslaw.
All in all, the food was very good.  The atmosphere was definitely Cuban both in vibe and décor…in a good way.  I just wish that the service hadn’t detracted from the experience so much.  I am all for attentiveness, and appreciate not having to flag down a server to get more water.  But, there’s something to be said for dining in peace and enjoying the company.  Hopefully the staff’s over-eagerness will wear off just slightly as the restaurant falls into its groove.
Coppelia Restaurant
207 West 14th Street
b/t 7th & 8th Avenues
website
Menupages listing