Will Always Yearn for the Yurt!

on March 16, 2009
I've shared a lot of my incredible dining experiences on Miss Menu in the past year, but all of these pale in comparison to the one I just had in Park City, UT. I don't use the word "amazing" very often, but our trip to The Viking Yurt truly was amazing.

We heard about The Viking Yurt from none other than US Magazine in a Sundance Film Festival wrap-up. After talking to our new best friend and owner of the Yurt, Joy, we took a vote and decided that we had to give this adventure a shot.

The evening starts with a sleigh ride up the ski slopes to an elevation of 8000 feet...so steep that there are seat belts involved! This offers the most ridiculous views, especially at sunset. Once we reached one of the ski lodges, we got off the sleigh and put on snow shoes for a 300 yard trek through the snow-covered forest. 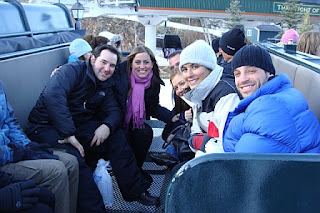 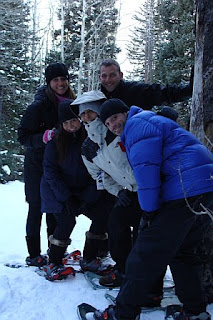 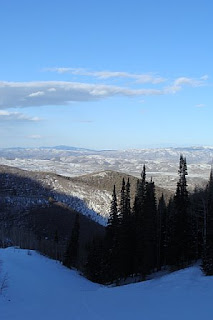 Emerging from the trees, we saw the Viking Yurt...a simple structure built into the side of the mountain with no electricity or running water. Sounds a little rustic, right? Far from it. We were in store for an evening filled with flowing wine, a roaring fire, live piano music, and a 5-course, top notch dinner prepared by Chef Adam Findlay. 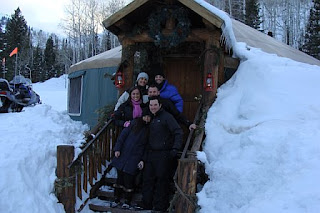 Upon arrival, a hot drink was served called glog. Yes, glog. Glog is a non-alcoholic berry based drink spiced with cardamom, nutmeg, and cinnamon. It was delicious, and the perfect way to warm up after the sleigh ride and snow shoeing.

First up was a selection of cheeses, crackers, and fruits. Fresh Vermont cheddar, Maytag blue, and brie. Yum. While there was beer, wine, and cocktails available on the menu, there was also the option of BYO with a corkage fee. We brought two bottles of white and one bottle of red. They both went so well with the cheeses. 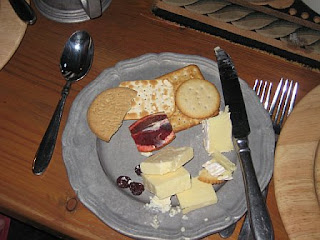 Next up was a cauliflower pear soup with lavender essence and white truffle oil. It was hands down the best soup I've ever had. Creamy, hearty, and rich. Each flavor really came through, but none overpowered the soup. 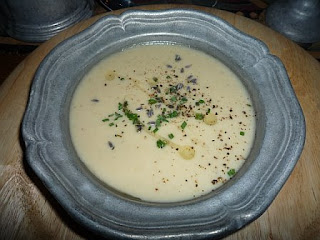 After that was a shaved fennel and watermelon salad topped with a parmesan crisp. This was so light, the kind of dish you'd expect to have in the summer, and was a nice contrast to the heavy soup before it. 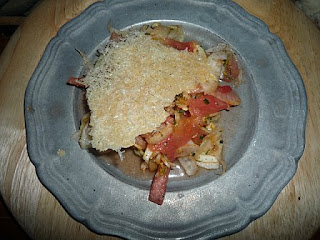 To cleanse our palates, lemon sorbet was served in rocks carried back from Norway - in keeping with the Scandinavian theme. Each rock came with a number engraved on the bottom indicating which region of Norway it came from. 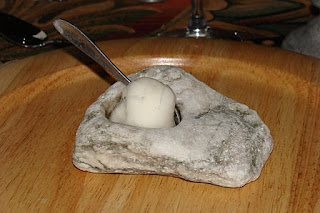 For the entree, we had wild salmon with a miso glaze, served with whipped potatoes and baby carrots with a red wine reduction. When Chef Findlay was announcing the menu at the beginning of the meal, I thought miso glaze and a red wine reduction on the same plate sounded pretty strange...but wow, was I wrong! Even though salmon isn't my favorite fish, this dish was out of this world. 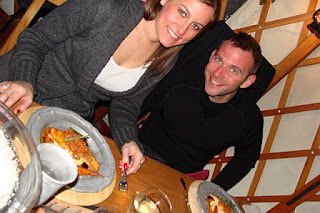 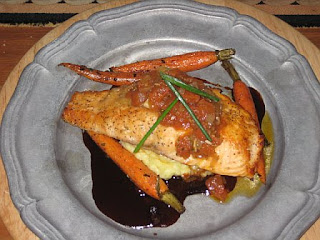 And, last but certainly not least, dessert. A frozen chocolate mousse was removed from its mold and topped with a rich raspberry sauce, fresh raspberries, a piece of peanut brittle, and a chocolate cigarette. Un. Real. 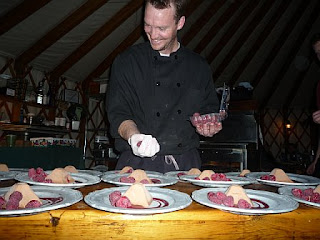 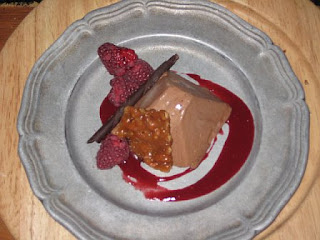 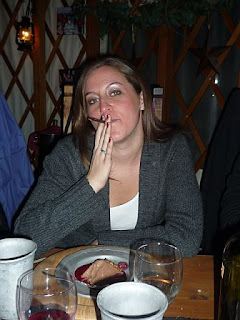 It's hard to put this amazing experience into words, but I hope I did it at least some justice. Take a look at the Viking Yurt's website for more descriptions and photos. And, if you are ever in Park City, or anywhere in Utah for that matter, you must...I repeat MUST venture to the Yurt!

Everything but the Kitchen Sink